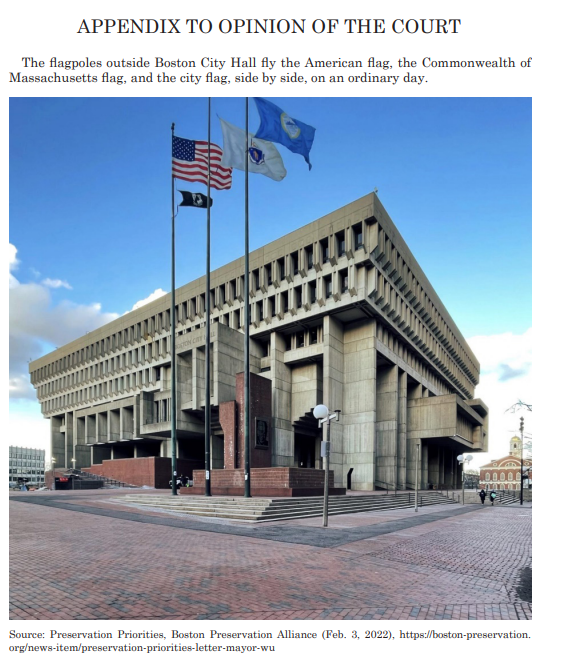 The Court found that the city had created a public forum when it allowed groups to fly their flags from the third flagpole and that the city could not then discriminate against speakers based on their viewpoint. Boston’s program, in place for many years, had approved “hundreds of requests” for various flags ranging from flags honoring first responders to Pride flags. None were denied until 2017 when a group called Camp Constitution asked to fly a Christian flag.

In an opinion authored by the soon-to-retire Justice Breyer, the Supreme Court unanimously concluded that because it was clear the flag program conveyed the group’s views rather than the government’s views. Therefore, refusing to allow the group to raise a Christian flag discriminated based on religious viewpoint and violated the Free Speech Clause.

The majority opinion analyzed the flag request in light of history, the public’s perception of who is speaking, and the extent to which the government exercised control over speech. Justices Alito, Thomas, and Gorsuch in a concurrence objected to the use of the test and said that the question should have been “whether the government is speaking instead of regulating private expression.” Justice Gorsuch and Thomas submitted yet another concurring opinion, saying that the “real problem” is that Boston admitted that it refused to fly a Christian flag but allowed a similar-looking secular flag displaying a cross to commemorate the Battle of Bunker Hill because the Christian flag would “violate the Establishment Clause.” They expressed concern that the Lemon test was inadequate to address issues where a law serves both a secular and religious purpose, or how to define “excessive entanglement” between church and state.

Under the Lemon test, described in the 1971 case of Lemon v. Kurtzman, there are three tests for whether a law passes Establishment Clause muster. First, the statute must have a secular legislative purpose; second, its principal or primary effect must be one that neither advances nor inhibits religion; finally, the statute must not foster an excessive government entanglement with religion.

Wrote Gorsuch, “Ultimately, Lemon devolved into a kind of children’s game. Start with a Christmas scene, a menorah, or a flag. Then pick your own ‘reasonable observe’ avatar. In this game, the avatar’s default settings are lazy, uniformed about history, and not particularly inclined to legal research. His default mood is irritable. To play, expose your avatar to the display and ask for his reaction. How does is feel about it? Mind you: Don’t ask him whether the proposed display actually amounts to an establishment of religion. Just ask him if he feels it ‘endorses’ religion. If so, game over.” (Italics in original.)

Gorsuch says that Boston then decided to “err on the safe side and reject” the Christian flag. “As it turns out, that route only invited years of litigation and a unanimous adverse decision because no government may discriminate against religious speech in a public forum. To avoid a spurious First Amendment problem, Boston wound up inviting a real one. Call it a Lemon trade.”

The Court overturned the District Court’s opinion, affirmed by the First Circuit, that the use of the third flagpole amounted to government speech.