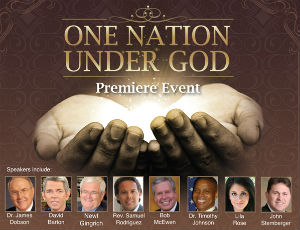 Yesterday was a premiere event for the Religious Right movement. In churches, homes, and other venues around the country, conservative Christians watched the premiere of “One Nation Under God,” a DVD created by the group United in Purpose, headed by Bill Dallas. (You can find out more general information about the DVD at the One Nation Under God website.) We attended a showing that was being held at the Old West Cowboy Church in Robinson, TX. Yes it was exactly as it sounds. One man showed up in spurs and chaps on a horse. The pastor of the church, who is also a charter member of the Waco Tea Party, welcomed us and talked about how it was important for Christians to “repossess America.” He told us that about 2,500 different venues would be premiering the DVD and they hoped to have 50,000 showings before the 2012 election.

There were several speakers on the DVD, and each of them had two responsibilities. First, to make sure that they established the idea that America is a Christian nation that that Judeo-Christian principles are to be inculcated into government. Second, the goal was to convince Christians that they should be politically involved, vote their values and encourage other Christians that they should do the same. Several popular conservatives are recruited to help make these points. Despite the multiplicity of voices, there are some problematic themes that run throughout the presentations. Each of the presenters engages in some element of either misrepresentation or misinterpretation of facts, specious logic, or just plain bad theology.

The misinterpretation of facts was somewhat expected. Most of it was conservative evangelical talking points. Both David Barton and Newt Gingrich made mention of the fact that the Supreme Court has taken prayer out of schools. Of course this is not true. Engel v. Vitale (1963) did not take prayer out of schools. Instead it ruled that teacher led school prayer is unconstitutional. The Court has since ruled that sectarian prayers at school events are unconstitutional. But the right of the individual to pray or lead other like-minded individuals in prayer is still allowed. To obfuscate this point is to pull the wool over people’s eyes. Barton also misinterprets the US Constitution. He says at one point that Art. VII of the Constitution incorporates the Declaration of Independence. Art. VII actually says, “The Ratification of the Conventions of nine States, shall be sufficient for the Establishment of this Constitution between the States so ratifying the Same.” I am sure Mr. Barton has a reason for saying that a one sentence article of the Constitution that makes no mention of the Declaration of Independence somehow incorporates that document, but he gave no further explanation.

Gingrich misinterpreted the historical understanding of Thomas Jefferson. Gingrich said that historians say that Jefferson didn’t believe in God, except that no reputable historian would say that. The truth is that Jefferson was a Deist who believed in the concept of God, but not in the supernatural elements of Christianity. People like Barton, Gingrich, Bill Dallas, and others have a historical problem. The US Constitution makes no mention of God or Christianity, and has some explicit anti-religious statements (i.e., the Establishment Clause and the prohibition on religious tests for holding office). Therefore, in order to make their argument, they have to connect the Declaration of Independence to the Constitution, and that’s a hard sell unless you’re willing to stretch the facts.

The speakers on the One Nation Under God DVD also engage in some interesting and fallacious logic. Most of it is found in the assumptions that they make. Barton for example, makes two very dangerous assumptions. First, he assumes that nothing has changed in the 235 years since the Declaration of Independence. So the vastly different context of today has no effect on how he views what our nation should do and what the Constitution should allow. The great strength of the Constitution in my opinion is that the Founders were smart enough to build in flexibility so that the document could adjust to fit the times. Barton, Gingrich, Dobson, Rodriguez, and the other speakers on this DVD seek to bring America back to an era where it was more homogenous. Gingrich in fact quoted a statistic that 80% of Americans believe in “classical America.” I do not know what that means, but that description is scary to me. Dr. Timothy Johnson, the head of the Frederick Douglass Foundation, an African-American conservative group, also used specious logic in order to attack liberal Christians. Dr. Johnson said that he did not understand how people could say they are pro-life themselves and then vote for pro-choice candidates. Dr. Johnson seems not to be able to understand that there are some people who believe in their personal morality, and yet do not want to impose that morality on others.

Mr. Barton makes the same illogical leap in his discussion of Christians in the voting booth. He assumes that all Christians feel the same way he does, and that if those Christians vote pro-choice or pro- gay marriage, then they are not voting their values. This type of rhetoric is disingenuous and does not help to win people to their cause.

Finally, there are just some shocking cases of bad theology. David Barton cites several texts that he claims stand for certain propositions. We checked each of the ones we could manage to write down, and all of them were misinterpreted. For example, Barton cites Is. 33:22 as support for the separation of powers. While that verse does mention the 3 branches of government (king, lawgiver, and judge) the verse says that the Lord is all those things. Therefore, a government that followed Isaiah’s words there would vest all those powers in one position, because that is what the Bible says in that verse. Reverend Samuel Rodriguez states that there is a biblical and moral imperative for Christians to vote a certain way, but cites no biblical support. Dr. James Dobson makes 2 egregious theological errors. When asked about whether Christians should be involved in politics, Dr. Dobson quotes Abraham Lincoln not the Bible. Dr. Dobson goes on to say that when a country forgets who they are, then they are destroyed. He implies that if America forgets their Christian heritage and begins to allow abortion and gay marriage then they will be destroyed. This statement is not just bad theology, but it is also offensive to every group of people who have been oppressed in the history of America. So God’s destruction will not fall because America enslaved Africans, destroyed their families, raped and killed them, but it will fall because of the unborn and gay people? America did not forget who they were when they were oppressing women or Asians or Catholics or any other group, but now is the time America is moving away from its Judeo-Christian principles. As with Gingrich’s statement about longing for a “classical America,” this statement bothered me. Dr. Dobson is using his theology to whitewash history, and to ignore the fact that America has never been the Christian nation that these people envision it to have been.

Dr. Dobson is using his theology to whitewash history, and to ignore the fact that America has never been the Christian nation that these people envision it to have been.

As I think about the events of the day and the content of the DVD, two final points jump out to me. One, Newt Gingrich said what the goal of this DVD really is. At one point he states that it is time for people of faith to take back power from the minority elite. That is the real issue. It is not truly about having this nation be Christian. It is not truly about feeling persecuted for their majority faith. Rather, this is about wanting to be in control of others. To compel people to follow their will (not even the will of God).

Two, my wife and I noticed something interesting as we sat amongst the members of the Old West Cowboy Church. The pastor provided note paper for us and encouraged us to take notes for our own edification. As we looked around room, we realized that we were the only people attempting to take detailed notes. Most people did not write anything down at all. Some only wrote down a sentence here or there. My wife and I were the only people who attempted to record all the major points being made by all the speakers. This lack of critical thought was the most appalling thing to me. These people were being sold on all kinds of historical, logical, and biblical inaccuracies, and they were more than willing to accept it without inspection.

Jason Hines is Associate Editor for ReligiousLiberty.TV an independent religious liberty website. A Harvard Law graduate, Jason practiced commercial litigation in Philadelphia for five years and conducted seminars on religious liberty in his spare time. This gave him the opportunity to discuss issues of religious freedom with Adventists in churches all over the United States. In 2008, Jason decided to devote his life to work in religious liberty. To that end, he enrolled at the Seminary at Andrews University, where he is pursuing a Master’s Degree in Religion. He is also a PhD candidate in the Religion, Politics, and Society at the J.M. Dawson Institute for Church-State Studies at Baylor University. Jason blogs about religious liberty and other religious issues at thehinesight.blogspot.com

6 thoughts on “Film Review: “One Nation Under God” (2011): Misinterpreted facts and frightening conclusions”