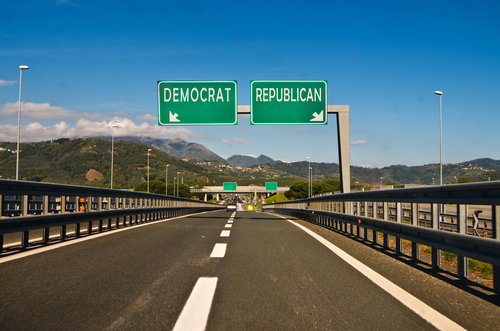 Every few months a pastor contacts me wondering what to do about a local parishioner who wants the church to endorse a candidate, hold a political event at the church, or distribute campaign literature. I’ve always pointed them to the Johnson Amendment, a 1954 Federal law which prohibits all non-profit 501(c)(3) organizations (including churches) from endorsing particular candidates, as an easy way to avoid bringing political division to the local church.

In reality, the Johnson Amendment has only been very rarely enforced, but the fear of losing tax-exempt status has kept most churches away from electoral politics. Church services and facilities
have been a refuge from the day-to-day political haranguing that takes place on cable news, on social media, or at the family table.

But the Johnson Amendment has provided pastors with a convenient and kind way to dismiss requests for political favors.

However, President Donald Trump has made it a point to try to repeal the Johnson Amendment. This is not so much about freedom of speech as it is about money.

Claiming that it takes “freedom” away from pastors to speak their minds on political issues, the repeal would also make it possible for churches to use tax-exempt donations to the churches to align behind political candidates and even provide tangible benefits such as advertising, facilities for rallies, and most important, the intangible concept to a large audience that God wants a certain candidate to win.  The poor candidate who is not endorsed by a church or non-profit would have to make due with typical non-tax exempt campaign donations.

While most local pastors wisely resist the encroachment of politics on their congregations, the religious right sees the value of turning churches into super PACs who collect tax-exempt donations and use the pastors and politically active members who could instill the “fear of God” to compel members to vote a certain way. Churches would become staging points for campaign rallies.

Some people think that the Johnson Amendment is in the Constitution, but it’s just an act that Congress passed in 1954, and Congress could conceivably get the votes to ultimately overturn it permanently. But in the meantime, the more likely scenario is that the IRS does remain under the executive control of the President who can simply, very publicly, order the IRS not to enforce the Johnson Amendment.

Trump’s move in this direction should be considered inevitable, and regardless of one’s own politics, unless churches want to see their congregations turn into real-life Facebook arguments and have members begging to use the fellowship hall to hold rallies and fill bulletins with campaign literature, it is imperative for churches to ACT NOW to have their church boards pass resolutions that amend their bylaws in ways that prohibit political campaigning on premises and to keep them politically neutral sites.  This way, pastors can point to the policy and avoid running the risk of being perceived as politically biased against the requester, avoid allegations of being unbalanced for one candidate or another, or throw open the floodgates to allow all would-be campaigners to present whatever materials they want on the church campus.

As far as model language is concerned, the Church of Latter Day Saints has posted a policy on Political Neutrality that could be adapted to meet the needs of other religious organizations and local churches. There is more useful information on the page, but this is the key portion:

A board action, as proposed above, is intended to provide local churches with a tool that they can use to stay clear of divisive political issues yet be able to engage issues as needed.