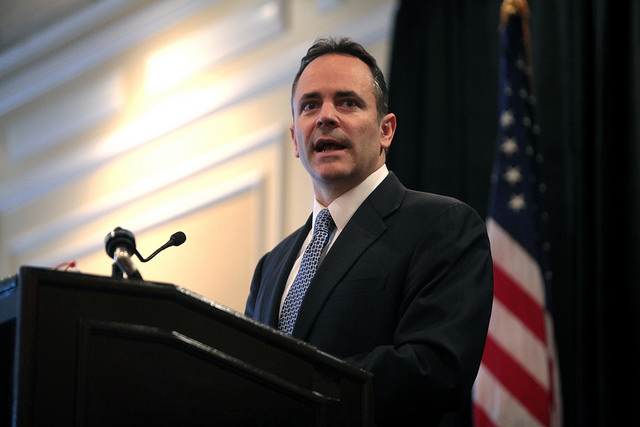 On April 13, 2016, Kentucky Governor Matt Bevin signed legislation (Senate Bill 216) which creates a single form that allows marriage license applicants to choose between being referred to as a bride, groom, or spouse. It also removes county clerks’ names from marriage licenses.

The bill, which passed the House unanimously, is considered a legislative fix for situations in which county clerks with religious objections to same-sex marriage do not want their names appearing on same-sex marriage licenses.

Rowan County Clerk Kim Davis’ attorney has indicated that the passage of SB 216 marks a victory in her highly publicized case. Davis was jailed for five days last year for refusing to issue marriage licenses bearing her name to same-sex couples.

Davis was released after marriage licenses in Rowan County were altered in September to remove Davis’ name and replace it with the county’s name and there was some controversy over whether the licenses would be legal in the state.

Between September and December things changed in Kentucky when Governor Steve Beshear was replaced due to term limits. In December, the newly elected Governor Bevin, who had supported Davis during his campaign, issued an executive order December that removed county clerks’ names from marriage licenses.

The ACLU had objected to the executive order on the grounds that a governor could not unilaterally change the state law that required that a county clerks’ name appear on the license. The passage of this legislation presumably resolves the objection.