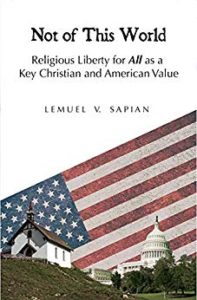 Very few things can be as divisive as religion. In free America, we are guaranteed freedom of religion. This has kept the United States a mighty nation, with its strength being derived from unity in diversity. However, many Christians believe America is a Christian Nation and should be upheld as such by civil laws. The public divide over this political issue is seen in the separation of people into diverse groups, Right-wing, Left-wing, conservative and liberal.

In Not of This World: Religious Liberty for All as a Key Christian and American Value, historian Lemuel Valendez Sapian explores the idea of Religious Freedom for all religious beliefs as an important American and Christian value. Religious toleration and separation of

Church and State in the context of civil relations is an important concept in today’s modern society. The necessity of a “wall” between Church and State can be supported by both historical experience and from the Bible itself.

Lemuel Valendez Sapian was born and raised in Denton, Texas and holds a Bachelor of Arts degree in History from the University of North Texas. Married with four fast-growing children, his academic passion is for world, religious, American and military historical studies.

The book is available in print and digital format at Amazon.com.