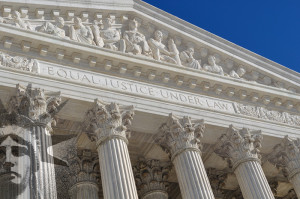 The Supreme Court rules that the President of the United States has broad discretion to impose travel restrictions, so long as they are related to a plausible governmental interest, and that a showing of Presidential animus toward a religious minority is not relevant.

In a 5-4 decision issued this morning, the U.S. Supreme Court overturned several lower courts and upheld President Trump’s September 2017 ban on travelers from several predominantly Muslim countries in Trump v. Hawaii. Although the initial bans were overturned, the administration refined the ban to the point where it passed the scrutiny of the U.S. Supreme Court.

While some on the court acknowledged the administration’s apparent animus toward Muslims, the Court did not follow the logic of this month’s earlier Masterpiece Cakeshop decision based on a showing that anti-religious animus demonstrated that the bakery owner was not treated fairly.

Instead, in today’s ruling, the Court largely deferred to a broad-based Presidential power to restrict immigration and travel so long as he could demonstrate that the entry of the people affected “would be detrimental to the interests of the United States.” In this case, the administration had compiled information about whether the home countries of the travelers provided enough information about whether each of these people would pose a security risk to the United States.

The Court reviewed allegations that the President had made anti-Muslim statements before and after he was inaugurated, but stated that ultimately, the travel ban was “neutral on its face,” and that the President was “largely immune from judicial control.” The Court would then look at the language of the ban itself to determine whether it was “plausibly related to the Government’s stated objective to protect the country and improve vetting processes.”

The Court noted that foreign nationals have no constitutional right to entry, but that the Court might be willing to address the issue if it affected the constitutional rights of a U.S. citizen. With regard to standing, the Court found that American relatives of people would have a “concrete and particularized” interest in seeking to be united with their family and could claim an Article III injury.

The Court also noted that the travel ban proclamation was no longer being applied to three Muslim-majority countries on the list, including Iraq, Sudan, and Chad, and that even for countries that remain subject to entry restrictions, there are “numerous exceptions.” In this way the President’s decision survives rational basis review.

The majority found that Korematsu v. United States (1944) in which the Supreme Court upheld a President’s right to the relocation of American citizens of Japanese descent into internment camps was not analogous to this case, but pointed out that Korematsu had been “gravely wrong the day it was decided.” The dissent said of this statement, “the Court takes the important step of finally overruling Korematsu.”

Justice Sotomayor dissented, pointing out that “[b]y blindly accepting the Government’s misguided invitation to sanction a discriminatory policy motivated by animosity toward a disfavored group, all in the name of a superficial claim of national security, the Court redeploys the same dangerous logic underlying Korematsu and merely replaces one ‘gravely wrong’ decision with another.”

She also noted that the Court applied an inconsistent standard to the Colorado Civil Rights Commission in Masterpiece Cakeshop which the Court found to have acted without “the neutrality that the Free Exercise Clause requires,” and the travel ban case where the Trump administration “will not be held accountable for breaching the First Amendment’s guarantee of religious neutrality and tolerance.”

In today’s decision, Sotomayor wrote, the majority, “completely sets aside the President’s charged statements about Muslims as irrelevant. That holding erodes the foundational principles of religious tolerance that the Court elsewhere has so emphatically protected, and it tells members of minority religions in our country ‘that they are outsiders, not full members of the political community.'”

The issue of immigration is particularly heated right now, with questions being raised about whether the administration acted properly when it decided that separating children from parents who had entered the country illegally was a legitimate exercise of state power, and now how to reunite those children with their parents.

The question in all of this has been how much power the President has, or who has standing to assert any claims on behalf of the children. Today’s decision gives the President broad powers, and overlooks any animus he may have demonstrated against any protected class so long as the wording of the final directive is “neutral on its face.”

While with the Masterpiece Cakeshop case, the Supreme Court determined that the lower courts had demonstrated animus and therefore should be reversed, here the Court seems to be taking the position that the President has specialized powers that are outside the Court’s jurisdiction, and so long as the President can demonstrate a “rational basis” for a decision, it will stand.

This decision will likely have a spill-over into the immigration cases, and even though the Supreme Court at least in its dicta disavowed the 1944 case in which it found the internment of American citizens of Japanese descent to be legal, it distinguished between that case and the travel ban on the basis that the Korematsu decision involved citizens and the travel ban involved non-citizens.

Frankly, given all that is going on, including the fact that providing immigrants within the United States with due process rights is up for debate despite the Supreme Court’s 1896 Wong Wing decision, and since the administration is willing to test its boundaries in so many directions, this decision will likely lead to more sweeping directives on a number of different issues, and this is not a good thing.