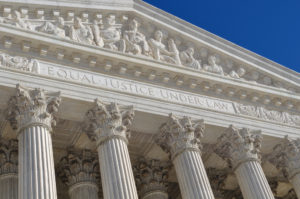 The ethical and moral onus is now on religious institutions as they decide whether to fire “ministerial” employees for reasons illegal in the secular world, such as age or the need for cancer treatment. Institutions engaging in this kind of discriminatory tactic will still need to answer to a Higher Source who will not be impressed with their ability to obtain summary judgment. The way for religious institutions to “win” these cases is to avoid them in the first place by taking the lead in treating employees with the highest degree of care and concern. California Governor Jerry Brown has vetoed legislation that would have prohibited religiously affiliated institutions from taking employment action against non-ministerial employees for their reproductive health decisions including “the use of any drug, device, or medical service.” On August 15, 2016, a Federal Court in Maryland upheld the dismissal of a lawsuit brought by a 56-year-old injured music teacher at a Seventh-day Adventist school on the basis that, as a “minister,” she had no right to pursue federal claims under the Americans with Disabilities Act, the Age Discrimination in Employment Act, and the Family and Medical Leave Act. In March 2015 a Ventura County Superior Court judge upheld the right of a for-profit Christian preschool to compel teachers to make a statement of faith and to obtain a statement by a pastor regarding how frequently they attend church, comment on their faith, and to endorse them as employees a Christian preschool. It is not WASC’s role to dictate bylaw changes, determine who is on the board, or to dictate how personnel decisions will be made. Threats to remove accreditation should be taken very seriously and La Sierra University, and its parent organization, the Seventh-day Adventist Church, like other institutions, can and must challenge WASC when it exceeds its authority.

Excerpt:   The U.S. Supreme Court in Hosanna-Tabor Evangelical Lutheran Church and School v. EEOC, held that the “ministerial exception” bars a school teacher from bringing employment discrimination claims against her religious employer. The Court’s ruling clearly grants religious institutions the freedom to employ (and terminate) employees who act as ministers of their faith. Yet the […]